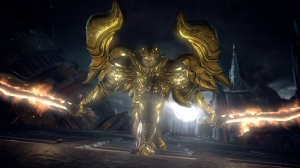 If you must know, the game takes place after the events of Castlevania: Lords of Shadow – Mirror of Fate. Dracula is in a weakened state after a fierce battle with Alucard and Simon Belmont and Castlevania: Lords of Shadow 2 continues from that point on. The game takes place in two time periods, the past and a modern day setting, but doesn’t involve time travel. The player controls Dracula, who must battle against the Brotherhood of Light and stop the forces of Satan if he wishes to be released from his curse of immortality. In order to be set free, Dracula must first repel the Brotherhood of Light from his castle.

The playable demo starts off with Dracula sitting in his throne room drinking from a goblet. The Brotherhood of Light use a battering ram to break through the door to begin their attack. When playing, the first thing I noticed is that Dracula uses a new weapon called the Blood Whip as his main weapon. The moves and specific whip attacks appear to be the same as they were when you played as Gabriel Belmont in Castlevania: Lords of Shadow. I also noticed that the light and dark powers were replaced by different light and dark powers, but each relatively do the same thing. The new powers are the Void Sword, which is used to recover life and the Chaos Claws, which are used to break enemy barriers or shields. Dracula can block attacks but has a faster dodge. All of Dracula’s powers are powered by blood so players will have the ability to drink the enemies’ blood during gameplay, restoring the light and dark powers and a small amount of health.

After the fight in the throne room, Dracula 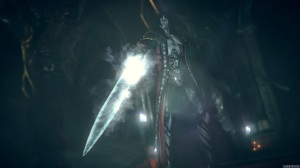 pushes the battering ram back through the door and does some light platforming to get outside. This time around, areas that can be traversed during platforming sections can be highlighted by pressing the L2 button. These areas have also been tweaked so the player moves through them much faster.

Dracula makes his way outside onto a balcony to see his castle completely under siege by the Brotherhood of Light and speaks his famous words, “What is a man?” He gazes up to see a giant mechanical Titan and continues with “but a miserable little pile of secrets” before he is attacked by a Golden Paladin and the Titan. Dracula fights the Golden Paladin and eventually drives him to retreat onto the Titan. The Titans are bigger than before, allowing for battles to take place on them while traversing the different sections.