Out of the crew here at Gamer Horizon, I feel that I am the biggest South Park fan of them all. I’ve seen all the seasons of South Park, seen the movie, played through that awful South Park game for the Nintendo 64, and even checked out the more recent titles whose illustrious names are but forgettable and banal. Like creators Matt Stone and Trey Parker, all I really wanted in a South Park game was to be engaged and immersed in the world like none other. So imagine my surprise when they both showed up on stage at last year’s Xbox E3 Press Conference to show off South Park: The Stick of Truth. When they started off their presentation by making fun of SmartGlass, I somehow knew that the game was going to stay true to their ideals, their humor, and the TV series.

South Park: The Stick of Truth casts you as the eponymous “new kid,” whose family moved to the city of South Park from out of town. In the demo we were shown running on the Xbox 360, South Park Elementary School is under siege by Stan, Kyle and several fourth graders and Cartman has tasked you with retrieving Kyle’s source of power: The Stick of Truth. The new kid is then paired up with Butters and the demo begins. 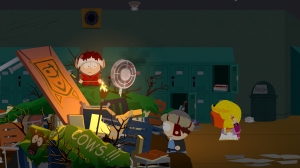 As expected of a game based on the TV show, the explorable areas are all rendered in 2D. Since the setting happens to be South Park Elementary, a lot of the makeshift barricades and forts that each fourth grader has made are all made up of things that can be found around the school. It’s not uncommon to find areas with fold-up tables, student desks, and other school furniture all haphazardly taped or stapled together, all in South Park’s signature style. The developers were quick to note that most of the game is seen through the eyes of the fourth graders’ imagination, so much of the backdrop, may they be forts, castles, or otherwise, are wholly based around what’s lying around in real life that they can use.

Traversing each area isn’t always simple. Like the more recent Mario RPGs, getting through some areas require a little bit of puzzle solving using items you’ve obtained throughout your adventure. In one part of the demo, the developers showed us a puzzle where a fourth grader is standing and laughing at our heroes behind a chain link fence, who just happens to be close to a drum that’s on fire. The developers then aim the new kid’s posterior directly at the drum and lets go, causing a huge explosion that knocks both the chain link fence and the fourth grader away, giving the party access to the fort. Later parts of the demo included using an ability to shrink down into underpants gnome size, thanks to the new kid finishing some underpants gnome quest prior to the demo, and a true-to-series depiction of Cartman’s anal probe sticking out of the new kid’s behind. Honestly, I lost it when I saw the latter, and completely forgot how and why the developers even used it.

Since the game is a RPG after all, South Park: The Stick of Truth has turn based battles. These battles are initiated not by random, but by engaging a fight with any hostile fourth grader on the field. As with most turn based RPGs, you are taken to a separate screen to duke it out. Most of the screenshots you see here and elsewhere on the internet don’t show a lot of the interface that was shown to us in the demo, for whatever reason, but you’ll have your prerequisite HP and MP meters represented as colored bars on top of the screen, in addition to its equivalent numeric value. Any enemy or boss you face will also have a meter displayed on the right side of the screen, opposite your party’s stats. Regular battle commands take inspiration from the Mario RPGs by optionally prompting you for a button press as the attack animation is executing, which modifies the attack slightly. Magic spells are, like the environments, all based off of things a fourth grader can do… so a fire spell, for instance, is “casted” by spraying an aerosol can into a lighter’s flame. Conversely, a lightning spell is casted by dousing your opponent in water and throwing a live car battery in the puddle. 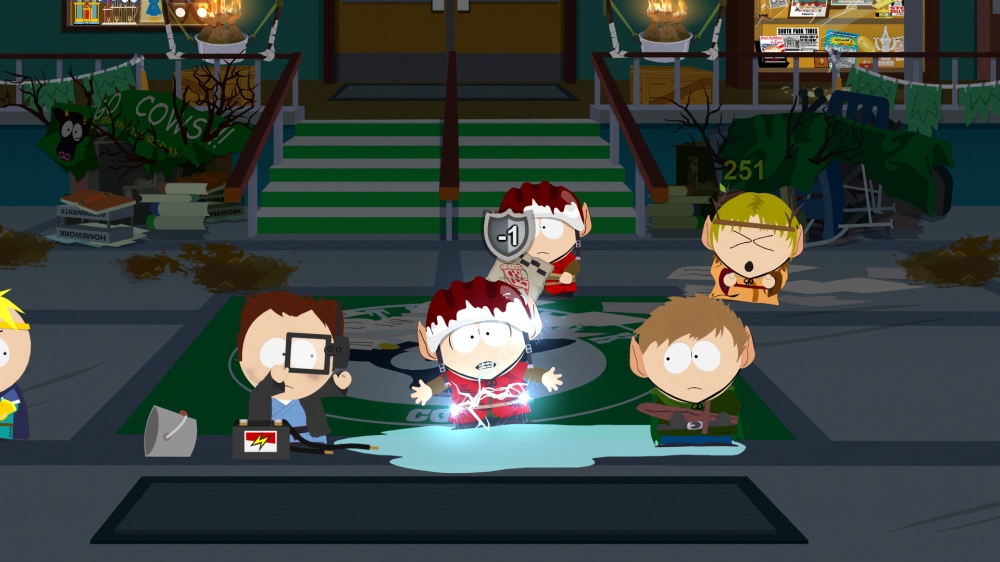 There’s one mechanic that the demo revealed that I found rather interesting. During the demo, the new kid and Butters went on to save a fourth grader from a bunch of bullies in the hallway. After defeating them in battle, the fourth grader thanked her heroes and sent the new kid and, presumably, Butters, a friend request. This was when the developers brought up the brilliant UI loosely based around the Facebook UI shown in the episode “You Have 0 Friends.” The developers indicated that having a lot of friends will be beneficial to the new kid in the long run, but never really explained why. I am reminded of the Social Link mechanic from Persona 3 and Persona 4 where the deeper your friendships are, the more interactions you’ll have from said party member; but since this seems to be just an arbitrary number that increments with how many people you help, I’d surmise that the actual friends count would be used to unlock skills or other benefits.

If you’ve read before that South Park: The Stick of Truth looks exactly like the TV series, I can tell you without a shadow of a doubt that it does. In fact, in the requisite RPG cutscenes of today, you’d swear that you’re actually watching an episode of South Park but all rendered in engine. The developers demoing the game demonstrated this by changing the new kid’s clothes and then triggering a cutscene. The new clothes consisted of leather assless chaps, a black thong, a leather jacket, and a dildo with an attached butt plug – in which the new kid farted on so that it’ll have an elemental effect of smelling like ass. As expected, the cutscene rendered the new kid in painstaking detail, from leather boot to leather jacket, and I’ve been scarred ever since.

The cutscene depicts the new kid and Butters finally reaching Kyle in their classroom and an argument ensues between him and Cartman. The developers are then given a choice to fight either Kyle or Cartman one on one. The developers chose Cartman and, after a short quip from him, the battle begins. The battle continues as you’d expect from a typical battle in this game, but Cartman gets pissed when his HP gets down to a third. He drops his staff, does yet another Cartman-esque quip, drops trow, and farts flame towards the new kid’s direction. The new kid quickly drops trow himself and farts fire towards Cartman, causing a very DragonBallZ inspired fire fight that only makes sense in the South Park universe. The developers are prompted to mash the A button as fast as they can and, after some serious button mashing, they survive the fight and down Eric Cartman. The demo ends with a teaser of what’s about to happen in the story. 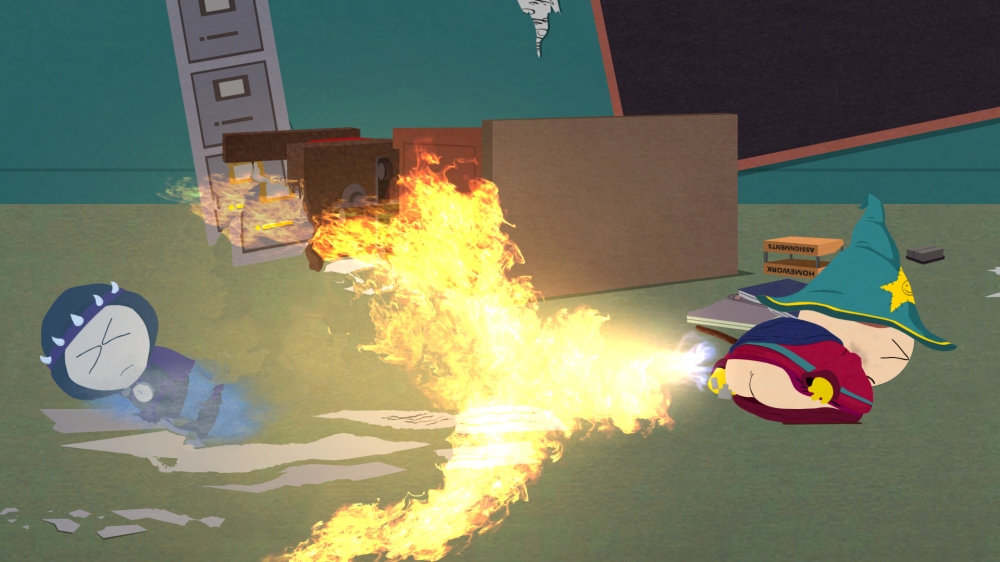 While I would’ve wanted to see the developers delve deeper into the XP and skill system, I understand why the demo is the way that it is. The demo was meant to instill confidence to fans of the series that, despite its new publishers, South Park: The Stick of Truth still aims to be the best game in franchise history… which isn’t that difficult to do. So far, from what I’ve seen, I applaud Obsidian for doing right with the South Park franchise as they’ve shown a vertical slice that shows the developers and South Park creators’ creativity and ingenuity to deliver a unique RPG experience that, while lampooning the genre’s conventions, manages to strike out on its own. What I’ve seen in this short demo has turned me into a believer. South Park: The Stick of Truth is scheduled to come out this holiday season… or whenever it’s supposed to come out. Because, y’know, video games.

0 thoughts on “E3 2013: Fart fireballs out of your rear in South Park: The Stick of Truth”