Where do I begin when telling the story of Remember Me? How about starting from the beginning. The first time I saw Remember Me, I thought the game looked and sounded cool. The closer it got to its release date, the more developer Dontnod Entertainment talked about their first title and the more I was eager to play. As an avid video gamer, I like to give a game the benefit of the doubt and see what it has to offer before making any judgments. That’s what I did for Remember Me and every other game I’ve played. Now that I have played through the game, I can honestly tell you that I was not impressed. The game was a little buggy at times and had serious frame rate issues when the story sequences kicked in and it even crashed on me twice. I wasn’t impressed with the overall story and felt it dragged on for far too long. The only part of the game that stood out was the memory remixing and combat as both posed a nice challenge and were fun to do. But overall, as excited as I was for this game, I can’t help but to feel let down.

Don’t Forget To Remember Me 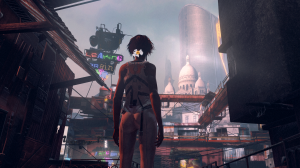 The story of Remember Me starts off with players taking control of an expert memory hunter named Nilin as she sits in La Bastille fortress prison. Any prisoner going to La Bastille automatically has their memory erased as a form of punishment. Nilin’s memory has been partially erased and she is on her way to having the rest of her memory wiped. While en route, Nilin gets a call from a mysterious individual named Edge who helps her escape La Bastille into the sewers under Neo-Paris. Edge plays a huge part in the game; he is the leader of an underground organization calling themselves the Errorist. Throughout the game he talks to Nilin and guides her from objective to objective, delivering story elements along the way.

In Remember Me, the corporation Memorize has found a way to digitize memories, turning them into a commodity that can be bought and sold. The ability to buy and sell memories has turned Memorize into the most powerful corporation in the world and made memory sharing the most addictive commodity on the market. The Errorist are fighting a war against Memorize to free society from its ultimate control and Edge believes that won’t happen without Nilin’s help. Once freed, Nilin must reacquire her lost memories and help the Errorist free Neo-Paris from the grip of Memorize.

On the surface, this sounds like an awesome story. It’s part of what got me to buy Remember Me to being with. But after playing for several hours, it’s not as good as it sounds. The moment the game started, the frame rate dropped during the opening sequence making it difficult to watch. This immediately took me out of the game. Once gameplay started, it got a lot better, but the story just moved too slow for me and seemed to drag on from chapter to chapter. The story didn’t have any suspense or thrill. The writers walked Nilin from room to room as if they were showing off a house. It all just felt too safe. The story did pick up and get interesting later in the game, but quickly dropped back to its tedious grind. There are eight chapters in total and four chapter breaks had the same frame rate issue. Each chapter has different objectives but they all fall back on the central theme of platforming to get from place to place and punching things in the face.

Platforming is a huge part of Remember Me. When Nilin isn’t in combat, she’s platforming her way through Neo-Paris. The platforming parts are nice but it would have been better if the game was more free roaming and less linear. There is only one path for Nilin to follow and the game uses markers to let the player know where they can climb and jump. The only exploration the player can do is when they are looking for Mnesist memories (Journal pages), Scaramechs (tiny insectiod robots), SAT Patches (health boost) and Focus Boosts (focus gauge). With platforming taking up 45% of gameplay and combat also taking up 45%, the last 10% would go to memory jacking.

The main feature of Remember Me is Nilin’s ability to go inside someone’s head and remix their memories. This is called memory remixing and involves looking at a specific memory event and changing the outcome to get the desired result. The results vary depending on who Nilin is remixing but the results can be the death of the person Nilin is working on, the death of someone else in the memory or changing someone’s mind and making them forget. The way memory remixing works is Nilin searches for memory glitches in someone’s memory. She then focuses on

these glitches to use them to slightly alter the individual’s perception of what happened. There can be several memory glitches and Nilin can only access them one at a time. The memory plays out like it were a video allowing the player and Nilin to scrub back and fourth through the memory searching for the right set of glitches to tamper with.

During a flashback in the game, Nilin is attempting to alter the memory of a S.A.B.R.E. Force officer so he thinks he killed his girlfriend and would take his own life. With memory remixing such a big part of Remember Me, it’s unfortunate that it’s only used four times in the entire game.

Along with memory remixing, Nilin has the ability to steal memories from certain characters and play them back with an ability called Remembrane. The Remembrane is activated when Nilin steals a memory and has to get to or past a certain area. The Remembrane shows the individual recounting of a certain event which allows Nilin to see what they did to enter a room with an access code or get past hidden obstacles.

The One Two Punch

Between platforming sections Nilin uses combat abilities called Pressens to defeat her enemies. Combat in Remember Me consists of unlocking a series of predetermined combo chains of varying length. I only managed to unlock 4 combo chains before I finished the game on the PlayStation 3. Each combo chain has its buttons already determined so all the player is allowed to do is choose which Pressens are placed and where in the combo. Pressens are specific attacks that have a specific ability attached to it. There are four Pressens to choose from. There’s the Power Pressens for doing extra damage, Regen Pressens for regaining health, Cooldown Pressens for reducing S-Pressens Cooldown time and Chain Pressens for multiplying the Pressens effect. The further down the combo chain a Pressen is, the bigger the effect will be. Combo chains consist of punch (Square) and kick (Triangle) attacks. The first combo chain unlocked is a typical three hit combo consisting of three punch attacks. The second is a five-hit combo chain that alternates between punches and kicks. Each subsequent chain varies the punches and kicks and 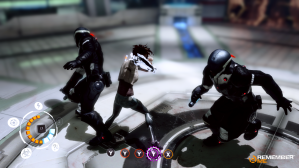 must be memorized for its full effectiveness. The genius of this system is that the player chooses where Power, Regen, Cooldown and Chain Pressens go in the Pressen combo. For example in the first combo chain, Power Pressens can be placed in all available slots allowing the player to deal quick damage. The same can be done with the Regen Pressens giving the player a quick health boost. The longer the combo chain, the more damage is dealt and health is gained. The ability to create your own attack type is great; the only downside to this is a combo chain can be broken if Nilin takes damage or switches targets. The enemies in the game don’t make it easy for Nilin as they tend to surround her when attacking.

The enemies of Remember Me come in different varieties. Leapers are mutant outcasts in Neo-Paris that live in the sewers and have a connection to Memorize Corp.  S.A.B.R.E. Force are a private security force under the direct control of Memorize to enforce the rules the corporation creates. AV-48N Nephilim, AV-48S Seraphim and AV-78 Zorn are security mechs designed to protect restricted areas of the game. None of the enemies in Remember Me stand out as too difficult considering Nilin can recover her health as she fights.

Ironically, Remember Me was not very memorable. It had potential to be more than what it was and if it featured more memory remixing, that would have helped. As it stands, there are only four opportunities in the game where this happens and it isn’t enough. The story is lacking and doesn’t stand out at all. The game is way too linear and would have been better if it were open world with parkour elements similar to Mirrors Edge. The story would have been better if Nilin was a memory hunter who goes around stealing specific memories and selling them, or perhaps she comes across a specific memory that gets her into trouble with some bad people. Those two ideas would have been overwhelmingly better than what Dontnod Entertainment did with Remember Me. The memory remixing parts of the game are great and using Pressens in combat stands out as different and unique but neither is enough to save the game from its boring, linear and repetitive nature. Remember Me is an okay start for developer Dontnod Entertainment, but doesn’t stand out from the pack. In this video game environment where bad games can ruin a developer, I’m hoping Dontnod Entertainment can bounce back from this underwhelming game.

Chris played Remember Me on normal difficulty on PlayStation 3. The game took 8 1/2 hours to complete. He was not provided with a copy of this game for review purposes.

+ Memory Remixing.
+ Pressens Combat.
-The story was bland and forgettable.
-Only four Memory Remixing parts of the game.
-Lacks an open world with Parkour.
-Too Linear.