E3 2013 has come and gone. After seeing more games than I’d care to count, it makes me smile to think that it’s an indie game made to look like a 16-bit JRPG from the 90s that is still floating around in my head a week later. Dragon Fantasy: Book II reminds me of many of my favorite Super Nintendo games, including Final Fantasy IV, Final Fantasy VI, Chrono Trigger and Secret of Mana, and if you’ve played any of those games, I’m sure one quick look at the screenshots will explain why. Clearly nostalgia rules over the creative minds at Muteki Corporation, and I’m perfectly okay with that. 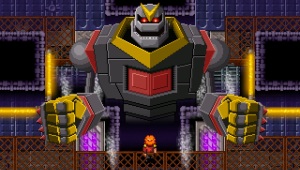 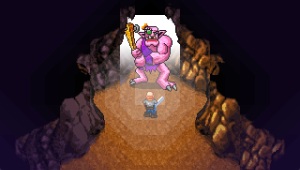 And it’s not just the visuals. The battle engine feels like Chrono Trigger too. When the player’s party runs into a group of enemies, both the player’s characters and the enemies reposition themselves across the map. Then the battle interface comes up which consists of fairly traditional menu based commands. Again like Chrono Trigger, the special abilities the characters can use can target an area of effect such as a circle or a line to hit multiple enemies. I saw a move that was remarkably similar to Crono’s Cyclone Tech from back in the day, and I nodded approvingly.

But what really captured my interest in the few minutes I had with Dragon Fantasy: Book II was the sense of humor on display. Ever play a Dragon Quest game where an enemy gets distracted by something or does something unexpected instead of attacking? Somehow those were some of my favorite moments in those games, and it seems many of the enemies in Dragon Fantasy: Book II have unique and entertaining abilities as well. Take a look at the screenshots below for two perfect examples: 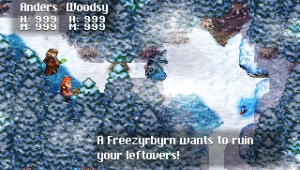 Can you blame me for looking forward to this? The game is about to go into Beta, so with any luck it should be out before the end of the year. The version I played was on Vita, and a PlayStation 3 version has also been announced, but Dragon Fantasy: Book II is also coming to “other platforms later” according to Adam Rippon, the creative director at Muteki Corporation. If it’s anything like Dragon Fantasy: Book I, it should arrive on PC, Mac and iOS and Android devices as well. Are you ready for a dose of nostalgia with a side of groan worthy pop-culture referencing puns? I sure as hell am.