If you haven’t heard of Atlus’s upcoming 2D Fighter, AquaPazza, I’ve got fictional character bios for you that I am pretty sure are way better than the official ones. Since you likely haven’t heard of these characters anyway, what’s the harm? 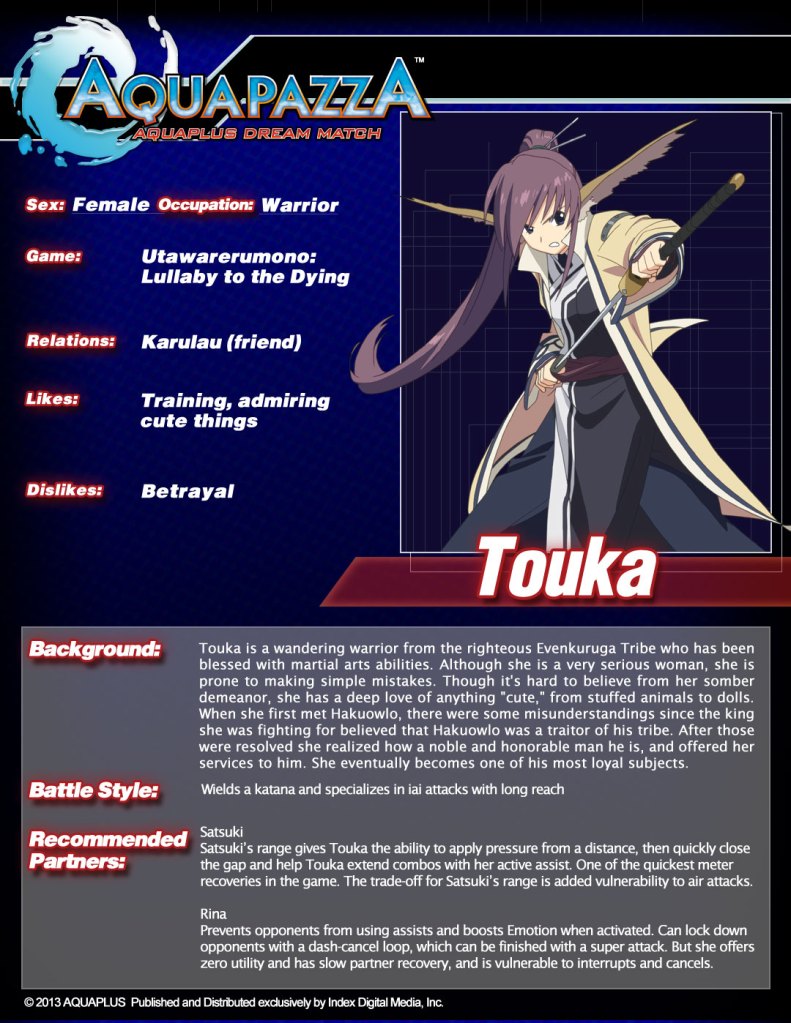 It had been a long time since Touka had a chance like this, and she wasn’t going to let its significance be lost on her. The air might have a thick, heavy scent, but it was a beautiful thickness. It was punctuated with the smells of animals, because Touka was at the pet store, ready to pick out a new furry friend.

She went in with the mind that she might get a dog. A medium-sized dog. One that could be petted with both hands at the same time, comfortably. She wanted her hands to be consumed with as much cute fluffy fluff fluffs as possible. Maybe not something like a golden retriever, but something a bit… fluffier. What was fluffier than a golden retriever? She needed to know.

There were a number of dogs in relatively small enclosures. It broke her heart that she could only take one home. They all looked up at her with expectant gazes, tails wagging so hard the dogs they belonged to shook back and forth. This was going to be a difficult decision. She had to make it, though. She stepped away from the cavorting canines to avoid their cute faces and snouts and the cute yapping…

And when she stepped to, she entered a different section of the pet store, containing a very different kind of animal. It was neither dog nor cat. It was fuzzy and furry, but small. It turned and revealed its face to Touka. It looked like a rat, but to its posterior, there was no tail attached. It had four legs like a hamster, but didn’t have hands, and could not grip onto things. It had a cute little pink nose, and a rotund body. It waddled forward, and looked at Touka with big black eyes. It then made a sound halfway between a squeak and a whistle. A second rodent-like creature wandered out from inside a small plastic home, and noticed what all the commotion was. It itself lurched forward, making the same unusual noise.

Touka’s heart melted. She turned to a shop employee, and asked, “What are those creatures called?” “Guinea pigs,” the employee replied. Within minutes, Touka had a cage ready to take home to put them in, and lots of delicious hay for them to eat, because her heart had set on these poor, adorable creatures, and she had to give them a warm home and a place to run around in.

So now, Touka fights to teach everyone how cute and awesome guinea pigs are. PIGGIE PIGGIE PIG PIG PIGS. 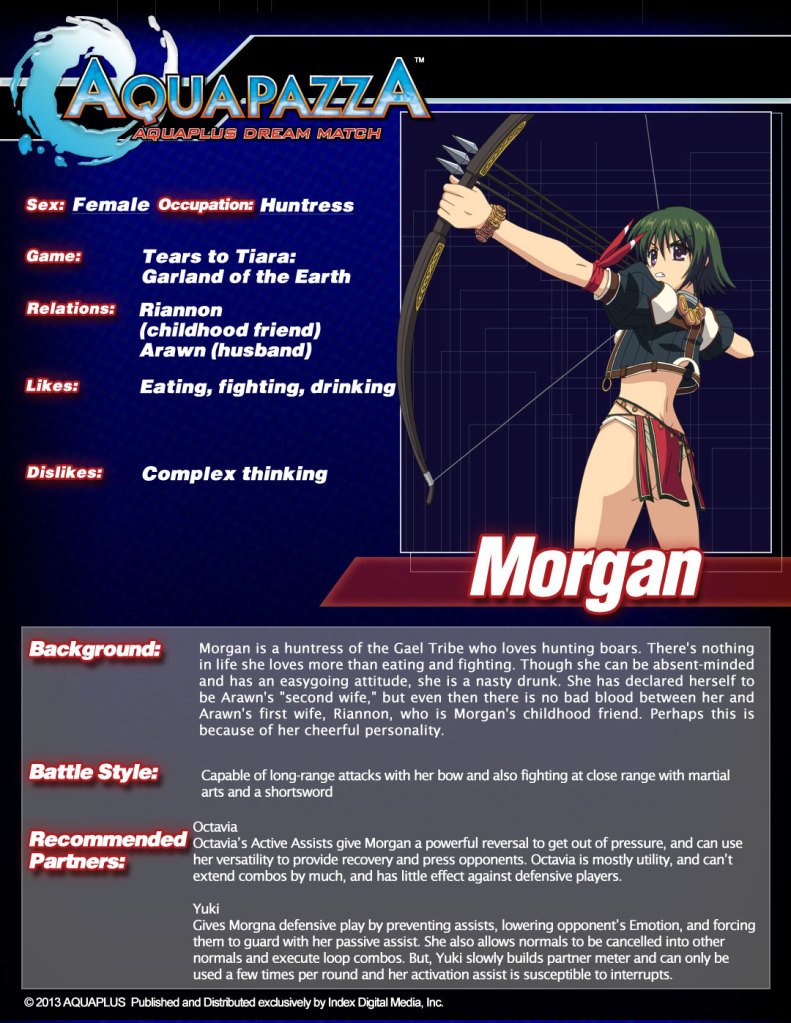 HEY YOU THERE, WHAT’S YOUR PROBLEM?

Um, me? I was just passing by and-

Oh Jesus! Why did you- what’s wrong with you?

THAT’LL TEACH YA FOR LOOKIN’ AT ME ALL FUNNY LIKE

ALRIGHT, LET’S SEE WHO ELSE GETS A BEATIN’ ~ HEY YOU PUSHING THE STROLLER!

Yes miss, can I help you-

Oh my lord! I have a baby! How could-

MATE I DON’T CARE ABOUT YOU OR KIDS

So, in the end, Morgan is fighting for bail money. 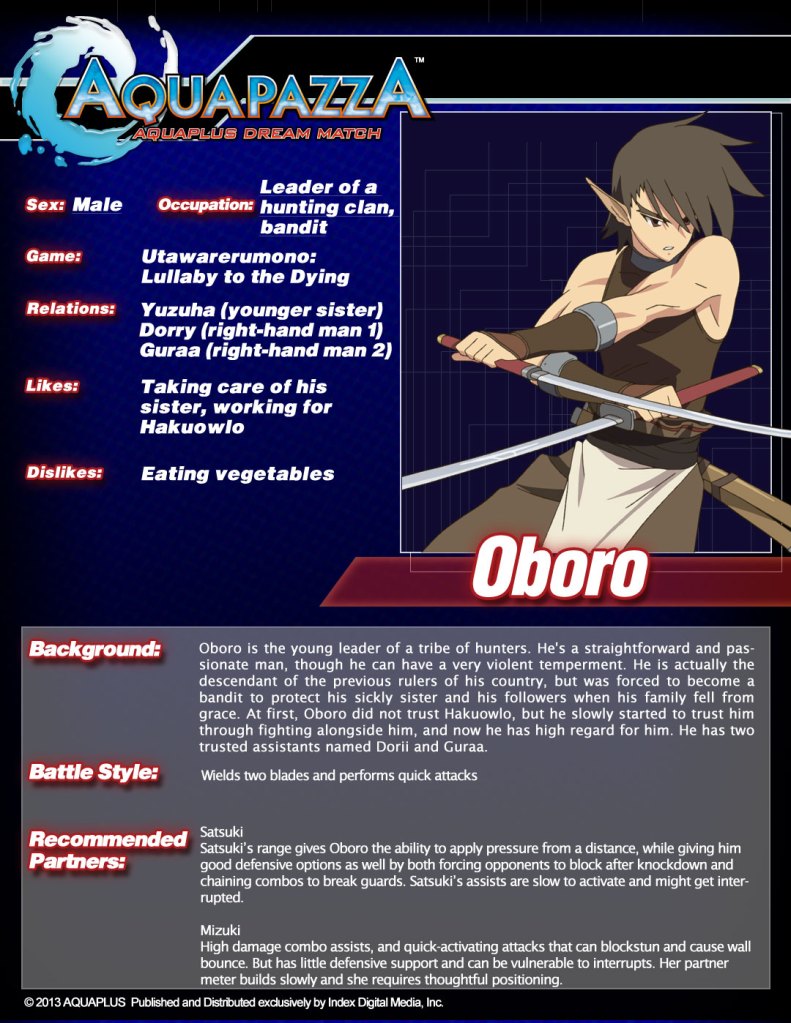 Dorii and Guraa were standing around while they waited for their next fight. Guraa broke the silence.

“Did you notice they spelled your name two different ways in the bio?”

Dorii acknowledged this with a grunt. “I don’t get why they have to Americanize me. This game is pretty Japanese as it is.”

Guraa responded with a start, “Hey, that’s short-sighted. How do you know it’s American? It could be British, or Irish. Or some of those weird outlying territories where English is spoken, oddly enough.”

Dorii shook his head. “It doesn’t matter. If Atlus can’t even make up their minds, what makes you think we can?”

“Eh, that’s a good point, I suppose,” and with that, Guraa resumed standing around. There wasn’t going to be any fighting soon. Not until the Aquapazza started, anyway.

“Look at how he’s holding those swords,” said Guraa. “It looks backwards.”

“Yeah, Guraa. I mean, it looks cool for a picture like that, but you have no defense when you hold them like that. Someone’s going to go straight up the middle, and THHHNK! Just like that.”

“Mmm… yeah.” Then they went back to standing around again.

“You know,” started Guraa. “If the master wins, you’ll probably get to say, officially, how your name is spelled.”

Dorii nodded, then nodded more deeply, as if he had processed what was just said.

“Yeah… that would be nice,” he said wistfully.

AquaPazza comes out November 19, only on PlayStation 3.