On November 15, 2013, the PlayStation 4 launched along with numerous games including Guerrilla’s epic space shooter Killzone: Shadow Fall. This being the sixth game in the Killzone franchise and the fourth to hit consoles, Guerrilla is looking to turn their newest PlayStation 4 title into a new trilogy. To do that, Guerrilla created a new story for the game, designed new weapons to fight with, and revamped the multiplayer making it more attractive for non hardcore players to enjoy. 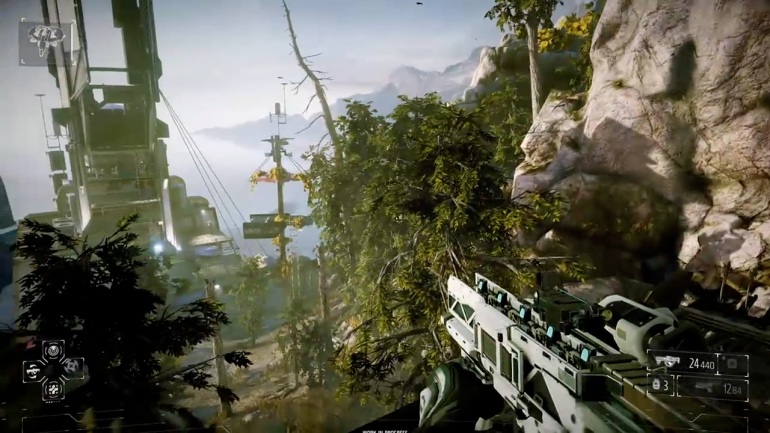 The Story So Far

After the fall of Helghan, the survivors are given sanctuary on Vekta. Vekta citizens are forcibly removed from their homes as the Helghast refugees are given half of the planet, and a giant wall is erected to separate the two states. The story starts off with a young Lucas Kellan and his father attempting to escape the Helghan controlled part of the planet. On the way out, Lucas and his father run into a Shadow Marshal named Sinclair who later becomes Lucas’ mentor and commanding officer as he becomes a Shadow Marshal himself. Early story elements are delivered between Lucas and Sinclair leaving the player to carry out the actions pushing the plot forward. Players can hear the frustration in his voice as peace with the Helghast deteriorates. Even I found it hard to disagree with Sinclair considering the amount of vitriol the Helghast have towards the ISA. Although there are no long drawn out conversations in the game, it’s obvious who does the most talking. Lucas might have enough dialogue to do more than just agree with Sinclair. Unfortunately, he doesn’t speak much unless it’s to agree with Sinclair. Fortunately, the story isn’t limited to Sinclair’s overwhelming desire for all out war. Guerrilla attempts to add some humanity to the Helghast plight by adding a female sniper named Echo whose only desire is to prevent a war. With everything that’s going on, it’s easy to get locked into the cycle of hatred towards the Helghast and over look the game’s stunning graphics.

Killzone: Shadow Fall looks amazing. Guerrilla did an excellent job in creating a world with photorealistic environments. The game starts the with the Shadow Marshal moving through one of the most beautifully rendered environments in the game. Lucas must cross the wall, making his way through a forest to rescue stranded ISA soldiers. That’s just one of the many environments in the game. The level design changes from a lush green forest to a derelict space ship, a beautiful Vektan city, run down slums, and the inevitable return to Helghan. It would have been nice to see some destructible environments along the way. The player does a lot of shooting throughout the game and a small amount of blowing things up. I’m not saying Lucas has to knock over a building. Let the player blow up a tree or any other standing object to create a bridge, block the Helghast from following, or crush a large number of enemies. Killzone could have benefited from the extra destruction. Along with the change in environments comes added gameplay elements. There is a zero gravity section in the game as well as a free fall section that forces the player to dodge large portions of the environment to make it safely to the ground. 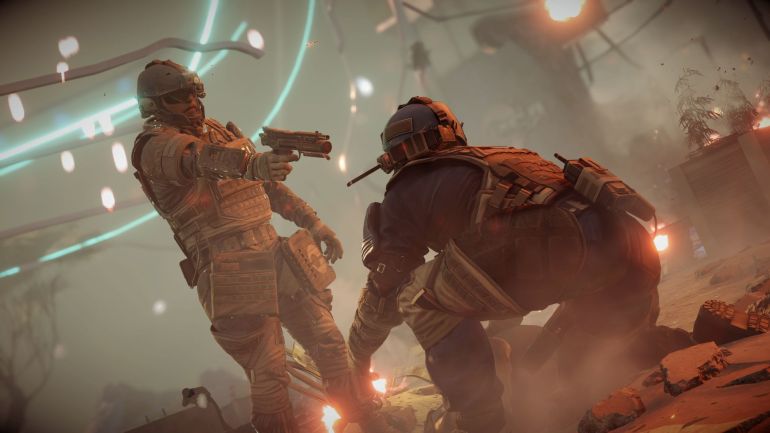 Guns play a large part in every shooter and Killzone: Shadow Fall is no different. I always liked the weapons created for the Killzone franchise. The newest weapon in the game is the LSR44 Spoor which doubles as a sub machine gun and chargeable single shot sniper rifle with exploding rounds. I wasn’t impressed with the gun’s design, but there’s no denying it’s effectiveness in the game. It’s the Shadow Marshall’s main weapon of choice during the campaign and can’t be swapped out for another weapon. Although the campaign does have a lot of weapons to choose from, certain guns are only available near the end of the game. The other weapon that’s widely used is the StA409 Keyzer which is the Helghan’s main battle rifle. It comes with different underbarrel attachments which include a shotgun, grenade launcher, and rocket launcher. All the machine guns in the game have the same low recoil, reducing the muzzle climb when firing full auto. This helps keep the targeting reticle on the enemy. I found this to be the same in multiplayer as well as the campaign. The game also uses the same cover mechanic from Killzone 2 which allows players to crouch behind a wall, peek over the top, aim and shoot. I only used the cover system in multiplayer and even then rarely. Killzone is not the type of game where a cover system is useful. The other addition to the game is a small hovering drone called the OWL.

The OWL is a small helper drone that follows Lucas around everywhere he goes. I’ve seen some real insane drones IRL but this drones main purpose is to support the Shadow Marshal in his endeavors. The OWL has four functions which are mapped to the controller’s touch pad. These functions includes creating a zip line to cross gaps, shocking enemies to immobilize them, shining a flashlight in dark areas, and creating a personal shield. The OWL is also used for scanning terminals to turn off alarms and gather data. Switching to the different options is simple, just swipe a finger across the touch pad in one of four directions to activate an option and press L1 to send the OWL into action. Although each one has its purposes, I rarely used them, the shock ability comes in handy against shielded enemies. Fortunately, there are only a handful of Helghast that have shields since this isn’t Halo. The flashlight is utterly useless. The OWL should shine a light in the direction you want, not fly over in the direction aimed and shine the light back at the player. I felt the OWL was a wasted tool. It did, however, come with a function that uses adrenaline packs to revive a fallen player.

Besides the extra abilities the OWL offers, the D-Pad has four abilities that are commonly used during the game. Up shows the current objective, down switches to alternate fire mode for the different guns, left uses adrenaline which slows the action down with a bullet time effect, and right activates a tactical echo that allows the Shadow Marshal to see through walls for a short period of time. Another feature the game adds are hidden collectibles. There’s a Helghan comic, news paper, intel, and audio logs that play out over the controllers speaker. The audio logs caught me off guard the first time as I was not expecting it and almost dropped the controller. Speaking of which, the controls work fine. Along with the games unlimited sprint, it’s relatively easy to target an enemy and take them down. I felt this way during the campaign and in multiplayer. 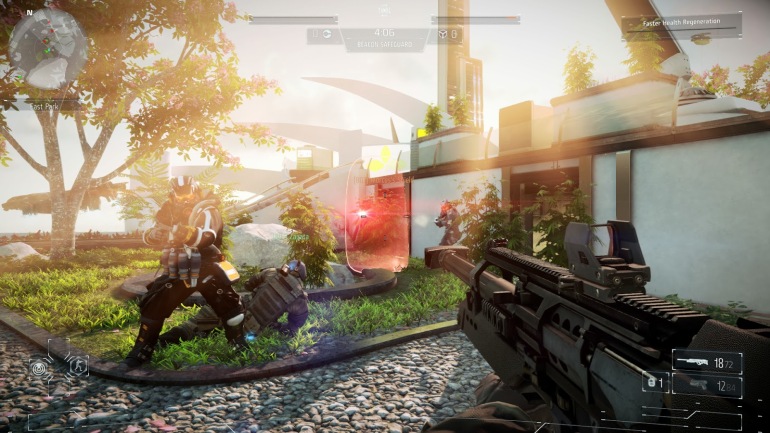 After playing a few rounds of multiplayer in Killzone: Shadow Fall, I can declare that it’s better than previous Killzone games. I’ve noticed that enemy players aren’t damage sponges this time around like in Killzone 3 multiplayer. The enemy players are a lot easier to take down making my time playing more enjoyable. The weapons which normally have to be unlocked in every other multiplayer game are all available from the start. Unlocks consist of weapon attachments like scopes and grenade launchers. All I had to do was go in and set up the different load outs for the three classes. The classes consist of the scout which uses sniper rifles like the StA101 Kameraad, the assault class which uses the automatic assault rifles like the M55 Rumbler, and the support class uses heavy machine guns like the Vns12A Purger. Along with the different weapons, each class also has different support abilities which are also unlocked. To unlock an item, players need to complete challenges rather than earning points. I’m not sure if I like this. Earning points is easy, but having to use a specific skill 50 or more times to unlock something can be more difficult and annoying.

Each class comes with unique abilities that best supports the different class. Scouts use abilities like cloak and teleport to move freely around the map. The assault class uses the nano shield, speed dash, and drone to push into and area of the map while the support class uses the revive drone, air support drone, spawn beacon, and turrets to control an area. Anyone who has played multiplayer in Killzone knows the game strength lies in its player created game modes. There are four game modes created by Guerrilla which include Classic Warzone, 24 Player Team Deathmatch, New Recruits, and Team Tactical Combat. I generally stick with Team Deathmatch and Classic Warzone but I’ve played several of the player made games. They can be quite creative, I played a game called “Paranoia” in which teams of two snipers had to hunt each other down. It was interesting but the novelty quickly wore off. I haven’t made an attempt to create my own multiplayer game mode yet but I have looked over the features available. You can set the weapon types, classes available, game modes, time limits, and so on. Eventually I will get around to creating my own game, but not right now. I am having way too much fun playing Classic Warzone at the moment.

Killzone: Shadow Fall is the latest release in Guerrilla Games hit franchise shooter. I have always liked the story mode of the series and can now say the same for the multiplayer as well. The story did a good job in showing the lengths Lucas and Sinclair will go to get information on Helghast activities. It’s nice to see open forests and clean cities for once vs the bombed out buildings the previous games offered. The introduction of a female Helghast soldier is an interesting addition to the game as she attempts to convince Lucas and the player that the Helghast are worth saving.

The game introduces a host of new weapons to choose from in single and multiplayer along with numerous attachments for added firepower. The OWL is an interesting addition to the game. I used the zip line out of necessity and didn’t see much need to use the other features it had to offer. Having the ability to see through walls with the tactical echo and revive ones self with adrenaline comes in handy when the action gets a little overwhelming.

Killzone: Shadow Fall’s multiplayer managed to hook me the moment I started playing. I liked the fact that all the weapons are available from the beginning. Classic Warzone is my favorite match because of the variety of gameplay modes it offers. I may not the best at multiplayer, but I can hold my own. I’m really impressed with what Guerrilla did to make Killzone: Shadow Fall a more enjoyable game overall.

Chris played the single player of Killzone: Shadow Fall for 8+ hours to complete the game. He was not supplied with a review copy of the game.