Hatsune Miku: Project DIVA Future Tone is a music and rhythm game made up of two collections of songs. Future Sound is where you will find rock and dance music, while Colorful Tone has a collection of songs that can only be described as “cute.” Both collections have over 100 songs and can be purchased digitally on the PlayStation Store for $29.99 a piece, or together in a bundle for $53.99. In music game terms, these games are gigantic. It’s not unusual for games of this genre to release with 30 or 40 tracks. Over 200 is practically unheard of, and if you buy both collections, you will have no less than 224 songs, adding up to well over 10 straight hours of music! I can’t understate how much value there is in that… especially in a world where music games like to charge you $2.00 per song as DLC. Each song also has its own, exclusive music video, so don’t be surprised when you see how big the downloads are!

So who (or what) is Hatsune Miku?

The simplest way I can describe Hatsune Miku is that she is a virtual pop idol, or a Vocaloid (singing voice synthesizer), though that might be a gross simplification. Really, Hatsune Miku is the culmination of literally thousands of composers and songwriters that have created the hundreds of songs that she performs in-game and the tens or even hundreds of thousands of songs that have been created using her voice over the years (not to mention the artists and animators that work on her music videos)! Though it is beyond the scope of this review to go into further detail, I highly recommend you do some additional reading if you’re interested.

I’m sad to say that Hatsune Miku: Project DIVA Future Tone is my very first game in the series, and I regret not getting into it sooner. I have been a big fan of music games since Parappa the Rapper, and it was the much more hardcore Bemani titles that really got me into it. I would spend countless hours playing Beatmania IIDX and Pop’n Music, and I eventually got good enough that I could score AAA on songs (which requires painfully precise timing). While Guitar Hero and Rock Band gained popularity in the United States, they did not require the kind of precision that was necessary in Bemani titles, and I always felt like they were easy-mode music games by comparison.

Hatsune Miku: Project DIVA Future Tone is definitely closer to the Bemani style of music game that I love. Precise timing is required to score Cool on a note, with slight timing mistakes resulting in a Good that doesn’t break your combo, or a Safe, Bad or Worst/Miss that does. A broken combo can be really heartbreaking when you’re chasing high scores, as a scoring multiplier resets every time you miss a note. I’d prefer if this were not the case, as near perfect play with a single miss in the middle of the song will score worse than technically less accomplished play with several misses towards the end, and thus encourages restarting a song after a single mistake.

In any case, the difficulty is there for the hardcore music game player. Songs range from 1 to 10 stars, and every one of the 224 songs have a minimum of 4 difficulty settings (64 have a fifth). The easier songs are appropriately easy (though possibly still a bit difficult for newcomers to the genre), but the hardest songs could potentially turns your hands into pretzels.

There are six types of notes in Hatsune Miku: Project DIVA Future Tone. Four correspond to the buttons on the PlayStation controller (Square, Circle, Cross/X and Triangle), and can also be activated using the appropriate buttons or the directions of the buttons on the d-pad. The other two are arrows that point left or right, and can be hit with the shoulder buttons or by sliding an analogue stick in the correct direction (the touch pad can also be configured for this purpose). That’s all fine and good… but it’s the held notes and multi-notes that are likely to twist up your fingers. With increasing frequency as songs get more difficult, the player is expected to hit multiple buttons simultaneously, or to hold down one or more notes as long as possible. In my case, this resulted in my holding down a button on one side of the controller, and playing all of the incoming notes on the other side. But then, of course, another note needs to be held in addition to the first one, and all of a sudden I’ve run out of fingers. It was at times like this that I noticed the stark difference between this and games like Beatmania IIDX. Playing on a Dualshock rather than a dedicated controller that lays flat on a desk (or arcade cabinet) that is designed for the game makes it a lot harder to hit multiple notes simultaneously–especially when you have to hold them.

Exasperating this issue further is the method with which the game delivers notes to the player. Rather than the tried and true note lane of so many music games before it, Hatsune Miku: Project DIVA Future Tone chooses instead to have note targets pop up all over the screen, and for the notes themselves to slide playfully towards them from every odd direction. A small arrow will spin around the target to provide a second method of determining the timing, but neither proves to be as easy to read as a classic note lane. Add to that a background video that may or may not purposely attempt to blind or at the very least distract the player, and note patterns where a single target will need to be hit several times, where sliding notes mischievously travel over a note that isn’t its actual target, and the way the game splits multi-notes into targets that spread all the way across the screen, and you’ve got a recipe for pretzel fingers! And all that’s before the level designers go out of their way to deliberately mess with you!

So the question is whether or not I should hold that against Hatsune Miku: Project DIVA Future Tone. After all, one of my favorite music games, Pop’n Music, was full of gimmicks that would mess with the player! As just a small example, Pop’n Music would distort the screen and paint effects over the note lane, and had literally dozens of effects designed to make the track harder to read on purpose! Notes would even move suddenly from one lane to another! But those effects were always optional, and were intended for the player that wanted more of a game than an instrument, whereas players focused completely on the music could simply disable such distractions. But in Hatsune Miku: Project DIVA Future Tone, there’s no traditional form of note distribution, and the distractions are really a part of the game. Like it or not, you’ll have to deal with them. For me, as a player that prefers focusing on the music rather than the game, that’s a negative.

I did encounter a few other minor issues while playing. The calibration system is barely adequate… it can be adjusted manually for audio delay, but not for visual, so some players may have a hard time calibrating their systems. It’s also telling that the game allows you to set up calibration on an individual basis from song to song. This is basically asking the player to make up for a game design flaw, and a lack of uniform calibration from song to song. It isn’t often a real issue, but occasionally a song does feel a bit out of sync compared to most of the others. This will matter the most to die-hard music game players.

I was also sad to find that in a game so heavily based on synthesizers, the notes don’t have keysounds. You can set it up so that the singers stop singing if you miss their notes, which almost makes up for the lack of proper keysounds, but during instrumental sections you don’t get the same aural feedback when you make mistakes. Instead you have to rely on Button FX, which are basically sound effects that play over the music when you hit notes. I find these completely obnoxious in how they cover up the music, and mercifully, they can be muted by adjusting Button FX Volume in the options, but turning them off completely leaves the player with literally no accurate feedback on timing. I compromised by leaving them on 1–the lowest audible setting– so that I could still enjoy the music while using the Button FX to improve my timing, but it’s definitely an inelegant solution.

Finally, it’s too bad they weren’t able to provide translations for the lyrics. You do get romaji, which is great if you want to sing along, but you’ll have rely on the music videos to provide hints about the meaning of the lyrics if you’re not fluent in Japanese.

Are you happy or annoyed?

How much you get out of Hatsune Miku: Project DIVA Future Tone is going to largely depend on how much you like the style of the music and the presentation. If you enjoy Japanese culture, J-pop, cute things and generally being happy, you’ll probably love this game. I can safely say that this game regularly makes me smile, and that it’s an uplifting and positive experience, just on an emotional level. On the other hand, I have friends that will literally leave the room when they see this game, as it offends them to their core. You really just have to ask yourself: Nyanyanyanyanyanyanya? 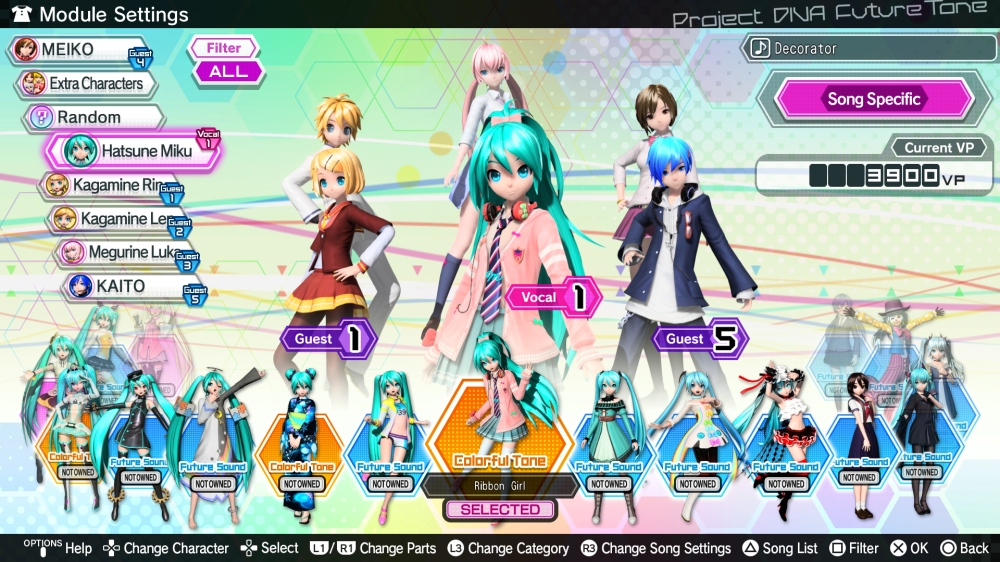 Despite its few shortcomings, Hatsune Miku: Project DIVA Future Tone is among the best the music genre has to offer. The list of songs is obscenely generous, and more importantly, the music is good! If you are trying to decide between Future Sound or Colorful Tone, I can’t help you, because I chose an equal number of favorite songs from both sets! You really can’t go wrong with either, so if you can manage, get both! You can also spend hours playing dress up with Hatsune Miku and the other performers, and with 4 or 5 difficult settings for each of the 224 songs, it’s fair to say that you could easily play this game for dozens or hundreds of hours. There’s also a practice mode, and a music video mode where you can take pictures, as well as a 10 courses for experts where you can play through a set of songs and compete on the leaderboards. It may feel a little bare bones in terms of game modes, but really, this game is all about the music. With 224 songs, I’m not complaining. Hatsune Miku: Project DIVA Future Tone is a must-play title for fans of the music and rhythm genre.

Ari played more than half of the songs in the game over 7 hours (does not include time spent in menus, etc.) on the Hard difficulty before writing this review. He received a copy of the game from Atlus U.S.A. for review purposes.