Actraiser is one of my all-time favorite SNES games, which I’ve written about here on Gamer Horizon multiple times over the years. It made my list of abandoned franchises, game soundtracks, and RPGish games that deserve modern sequels. Needless to say, it’s an important game to me, so imagine my surprise a few weeks back when out of nowhere Sega announced SolSeraph, a game that at a glance seemed very much like a spiritual successor to Actraiser. I was hyped immediately, and told everyone that would listen about this, a game I had been hoping for decades that someone would develop, and which now seemed to magically exist. With that being that case, I’m quite sad to say that SolSeraph is not Actraiser, though it tries very hard to be.

Like Actraiser, SolSeraph features two types of game play: side-scrolling action and overhead strategy, and like Actraiser, the player controls a godly protagonist, this time, the Knight of Dawn, Helios, who fights against the Younger Gods that torment humanity. They even hired Yuzu Koshiro, the composer of Actraiser’s phenomenal soundtrack, to compose the main theme for SolSeraph. All the pieces were in place for this to be the spiritual successor I was waiting for! 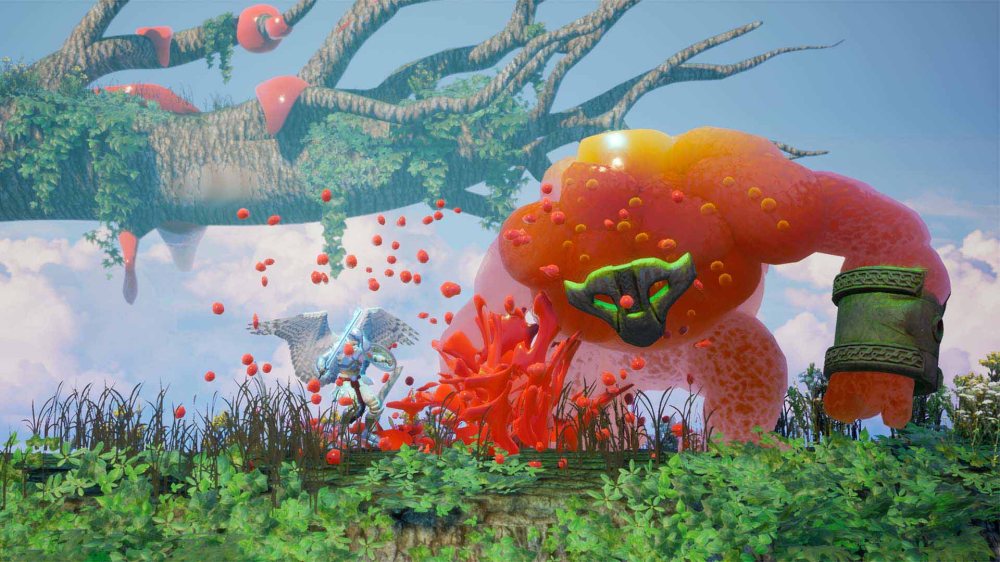 But I should have known after the very first side-scrolling action stage that something was a little off. I wasn’t expecting much from the combat, as Actraiser’s was very simplistic, but SolSeraph takes the basic premise of that old SNES combat and adds in strange features that detract rather than compliment. Enemies spawn in slowly from the foreground or background, and can’t be hit until they reach the same 2D plane as the player, which is time consuming and often irritating. There are also far more enemies on screen, which would be fine in a different battle engine, but not in one where the slightest contact with an enemy deals damage. The ability to block and dodge are slightly more welcome, and on occasion provide opportunity for interesting combat, but those instances are the exception, not the rule. And then there’s the level design, which is extremely straightforward, and feels like a monster gauntlet followed by a boss rather than a place to explore, especially when considering that there is nothing to discover or collect in these stages, aside from health and magic restoratives.

But that’s okay; the combat really wasn’t what made me fall in love with Actraiser to begin with. Instead, it was the purpose that action was given by the other half of the game that really tied things together. As an arrow firing angel, I guided the people to build their villages, and led them to destroy monster’s lairs and uncover hidden artifacts and secrets! I listened to their prayers! I performed miracles for their benefit and to defend them when monsters tried to kidnap or attack them! And I even destroyed their villages with an earthquake, knowing that they would rebuild with stronger materials and become a more resilient civilization as a result. And when the time came to explore the depths of an old cave or ruin, I wanted to dive in headfirst, and was rewarded with decent combat, great exploration and incredible music. 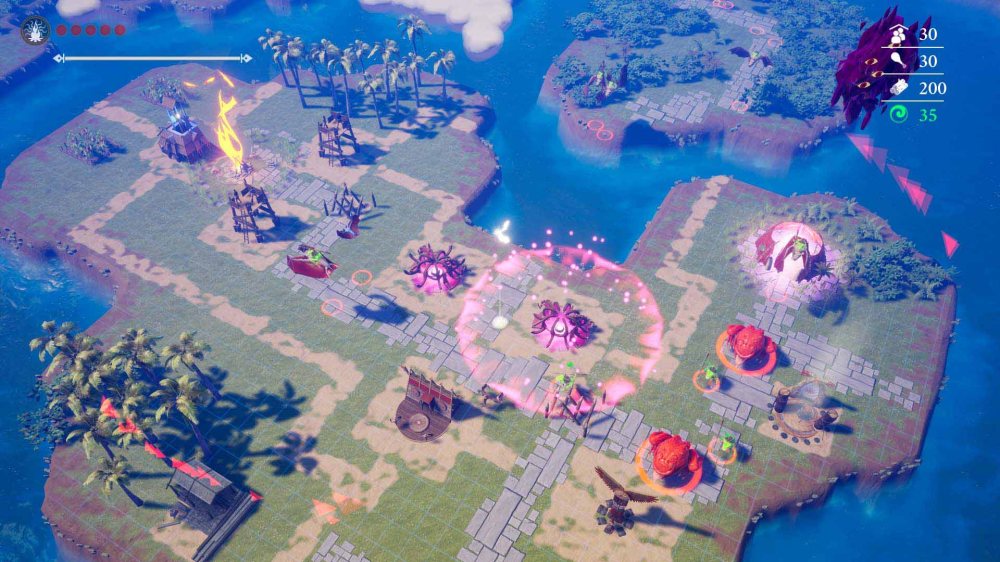 SolSeraph handles the strategy aspect of the game quite differently. I’m just going to blurt it out: strategy mode is just basic tower defense.  At first it seems to be more than that, as you build lumber mills to gather wood, homes for the people to live in, and farms to feed them. But it is soon obvious that wood, crops and even the people themselves are little more than resources to build and man the usual towers you’ve seen in countless other games. There’s archer, magic and bomb towers, and barracks that send out a few soldiers. Beyond that there are three buildings that buff towers and a spike trap to lay on the road the ground units walk on, and that’s about it for tower defense.

Tower defense can be extremely fun and challenging if done right, but what’s on offer here is just barebones and underwhelming. It’s also quite awkward, as in another nod to Actraiser, you can only build close to an already existing structure, but you can also very quickly and without cost build roads as long as you want to get around this limitation, so what’s the point of it to begin with? The one scarce resource in the game is wood, but once you understand how to utilize roads, it’s easy enough to draw a path to the other side of the map and plop down a lumber mill without any consequence. 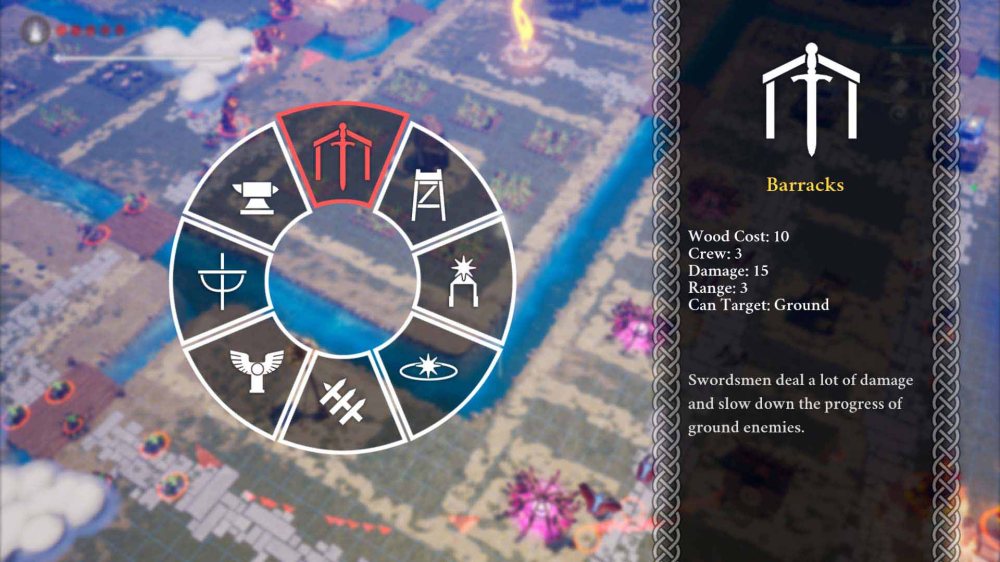 While in strategy mode, the player will periodically be tasked with destroying a source of the spawning monsters. Unlike the intro and ending stages to each map, which are usually proper—if uninspired—levels, the challenges that take place in action mode for the monster lairs are brief, and usually consist of a few waves of enemies in a small area. And since the battle engine is so littered with monsters appearing from every direction there’s really little to do aside from take a lot of damage and swing at everything until there’s nothing left. It gets even worse when off-screen traps start firing projectiles. The camera allows Helios to get far too close to the edge of the screen before scrolling, so it’s very easy to get hit by something that was invisible a fraction of a second earlier. When all is said and done, the combat in SolSeraph is less fun than the nearly 30-year old game that inspired it. The worst part is, after clearing one of these stages, it doesn’t even stop the monsters from spawning in strategy mode! You do get a permanent upgrade to health or magic, but that’s it. I guess it makes sense that the developers wanted to keep the tower defense somewhat challenging, but it doesn’t really reward the player in a meaningful way aside from getting them one step closer to the end of the stage.

So the action stages aren’t fun and the strategy and city building has been replaced by basic tower defense. What’s left? What is there to motivate the player to keep playing after the first couple of maps? In Actraiser, the people were relatable and humble. They provided offerings and prayers that strengthened God’s avatar and angel.  Though their stories were simple, they still managed to resonate, and it was fun to help them grow their villages and cities to be as prosperous and populated as possible. In SolSeraph, once all of the monster lairs have been destroyed, the player can take on the last stage of the map and face the Younger God within. A straightforward stage and boss fight later there is no reason to ever return to that particular map. The monsters stop spawning, and that’s that. 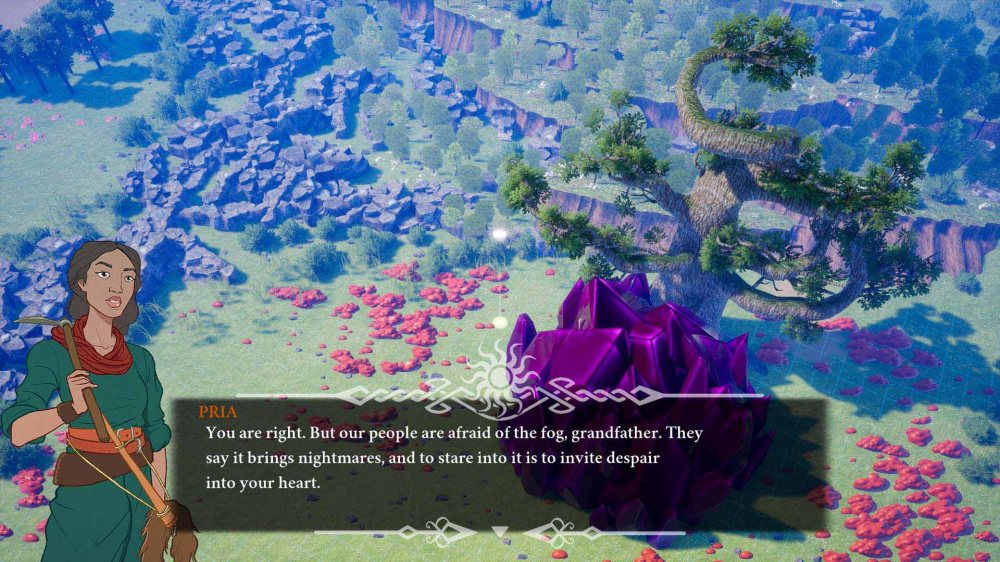 Each stage does have a brief story to tell, but these stories are written in a way that feels modern and sarcastic, with comic relief characters and light-hearted banter that doesn’t mesh well with the supposedly desperate setting. The dialogue has no meaningful consequence in either strategy or action mode. It just pops up in strategy mode to frequently interrupt the player with unimportant blathering. Ultimately the dialog falls flat.

My first impression of SolSeraph left me feeling jubilated, but after playing the game and digging deeper into its mechanics, I found that what first appeared to be a respectful homage to Actraiser quickly faded into pale imitation. Perhaps the greatest failure is that in switching to tower defense for strategy mode, the player is directly controlling everything rather than guiding the people more passively. The truth is that the overhead element of Actraiser was less strategy and more simulation, and in that respect, it complimented the relationship between the people and their God whose angel and avatar were controlled by the player. Everything meshed together harmoniously, and each mode of gameplay helped the other to feel greater than the sum of its parts. SolSeraph unfortunately missed the mark. With better level design and combat, a decent story, and a much more interesting strategy mode, it could have reached great heights, but at this point I can only recommend playing Actraiser again instead.

Ari played 4 hours of SolSeraph, but did not complete the game. He received a copy of the game for review purposes from SEGA.