Much to the chagrin of my Android totin‘ colleagues here on Gamer Horizon, Plants vs Zombies 2: It’s About Time was released on iOS platforms a couple of weeks ago. And while the game is eventually coming out on other platforms, I figured it’d be a good time to elaborate on the magical nature of Plants vs Zombies 2: It’s About Time and its free to play nature.

Over the past couple of years developers, from Zynga to King, have tried to figure out ways to entice people to play their games and, hopefully, pay their way to be able to play their game a lot more than what’s allotted. The idea behind this is simple: If you’re a big enough fan of their game, in all likelihood, you’ll probably spend a lot of money to continue playing their game and continue the gameplay loop that you’ve caught yourself in. This is typically controlled in the form of Energy, which replenishes after a certain period of time, and limits the amount of actions that you can do in the game. Some games have implemented social means to receive more Energy, but all that is is a way for these developers to continuously promote the game for free, increasing the likelihood that someone will convert and actually purchase Energy. You can imagine that if you’re hooked on a game, that this can be a very costly enterprise.

What if I told you that even though it’s a free to play game, that Plants vs. Zombies 2: It’s About Time has absolutely none of that nonsense? And, additionally, what if I told you that the payment gateways are merely all about unlocking certain segments of the game that you can already unlock just by playing through the levels? In order to answer this question, which is a surprisingly enthusiastic, “Yes,” I need to explain the game’s structure from the moment you purchase it on the App Store to the moment you actually jump into your first battle.

Upon downloading the game and creating your profile, you’re given a choice to either go through a tutorial that lasts for a couple of stages (which nets you an Achievement for completion, mind) set in the original Plants vs. Zombies backyard, or head straight into the last stage of the area to verify that you’ve got what it takes to continue. None of the pay options, as far as I can recall, are actually available for you to view until the game shows you the existence of the store in the next time period. 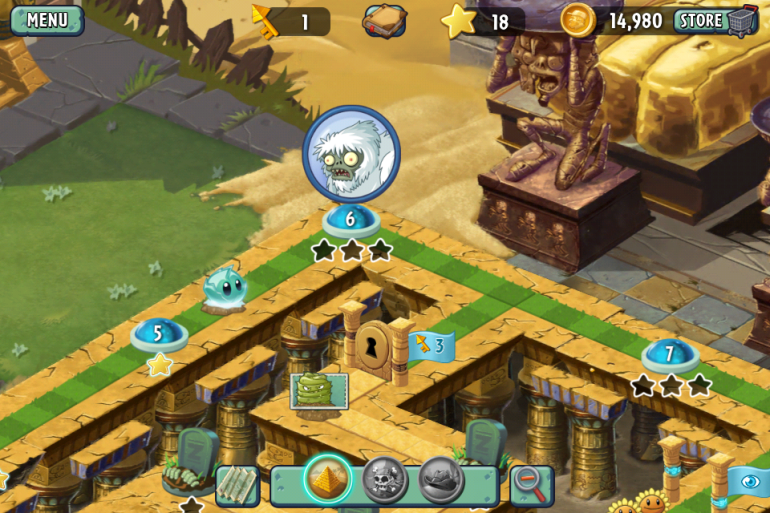 I’ll save the explanation of the story and everything else for the future, but when you get to the first time period, you get an overworld map that’s very similar to Super Mario Bros. 3 for the NES. As you progress through the time period you’re in, beating each section, the tutorial continues with the new features exclusive to Plants vs. Zombies 2, which include keys, new plants, and more challenges. Keys are dropped randomly during battles and can be used to unlock paths that branch outside of the main path. These branched paths either unlock plants that you can use during your game or upgrades that will allow you to either have extra sun during the start of a battle, earn back sun for every plant that’s been dug up, or have an extra plant food slot, which is a brand new mechanic to the game.

Once you’ve unlocked a significant amount of the time period, which means unlocking all the plants on the main path, you are then required to replay some of the battles you’ve played before. The reasoning for this is that in order to advance to the next time period, you need to collect a certain amount of stars. And your first playthrough of each battle, save for later battles in the time period, does not net you stars. Stars work similarly to the stars in Super Mario 64: Having a certain amount of Stars will allow you to unlock later time periods in the game.

I think you know where I’m getting at here: Many of the things that you’ll need to play through the game from beginning to end are actually available for you, free of charge.

So what do we have to pay for?

Nothing, actually. In fact, if you consider yourself a seasoned veteran of Plants vs. Zombies, you can probably get through a lot of the game without paying a single dime. With that said, however, you should probably know where to expect these gateways and whether or not there’s options.

Let me dispense with the bad news first: There are certain plants that are only available by buying them from the store. I should probably add that while I’m only in the Pirates time period, which is the 2nd of the available three time periods in the game, I’ve never ever thought that buying any of the available plants in the store was an option. That being said, if you’ve used the Squash, Snow Pea, Jalapeno, and Torchwood plants extensively while playing the original Plants vs. Zombies and would like to use them in this game, then I regret to inform you that you’ll have to shell out $2.99 for each plant in order to be able to use them in the game.

As mentioned in the previous section, the overworld maps contain sections that are locked with keys, which drop during battles. Should you wish to forgo collecting the coins and would like to unlock these gates, it’ll cost you $1.99 for each gate, regardless of how many keys are required. Also, should you feel that you’d much rather head to the next time period without collecting the stars to unlock it, the act will cost you $4.99 for each time period. There’s also additional upgrades found in the store, apart from the ones you find on the overworld map, that can be unlocked for $2.99. In addition to this, you can buy more coins so that you can spend them during battle to get more plant food or be able to use the game’s gesture powers. These can cost you from $2.99 for 5,000 coins, to upwards to about $99.99 for 450,000 coins, which the game brags as its “Best Deal.” I should probably add that coins are not transferrable to keys, upgrades, or time period unlocks, which makes the notion of spending $99.99 on coins alone for this game ridiculous. 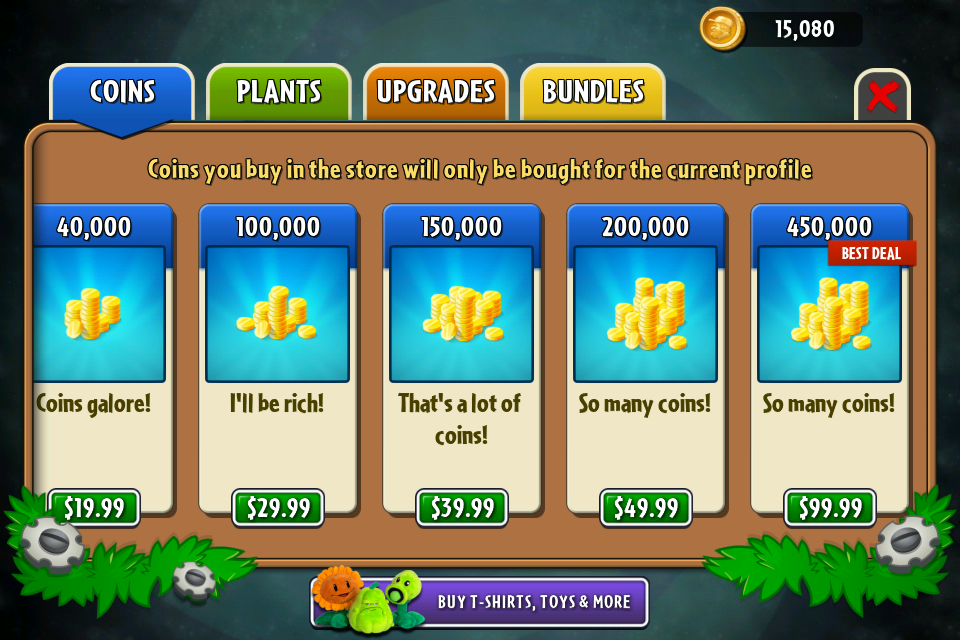 Perhaps the beauty of this ridiculousness is that you’ll never even have to deal with any of these transactions at all. It’s true that PopCap is asking a lot for some of these, almost seemingly taking a page out of EA’s digital unlock strategies for their bigger titles on other consoles, but just like these games, Plants vs. Zombies 2: It’s About Time can be played entirely without any of these purchasable niceties. In fact, with the game at a price point of free, it’s almost confusing as to why there isn’t a definitive bundle (which they do have to some extent, but not as comprehensive) that would allow fans of the game to support this experiment.

It could’ve been worse

While I’m not going to posit about the morality of charging money to get through a free to play game I can see where PopCap and, conversely, EA is going with this rationale: They’d like a lot more people to see the content they’ve created, regardless of their skill level, so might as well earn money along the way. I’ve talked to plenty of people in the past about how, before the advent of GameFAQs, they would be buying strategy guides to help them understand the game’s mechanics and use the information contained to playthrough a game. In a way, I can see this similar attitude as a similar reaction to the payment gates. In short, this is more of a cost vs. time scenario for some, and when you don’t have a lot of time to devote to really learn how a game works, the paid solution seems more palatable.

And I can’t help but think that the game could’ve been more dubious in terms of its free to play antics. Instead, PopCap decided to take the road less traveled and offer a full priced game, providing a challenging set of experiences and new plants that are worthy successors to the locked plants in the store, for absolutely free. Perhaps what PopCap is really saying is this: If you’re having a tough time with Plants vs. Zombies 2: It’s About Time, maybe it’s time to brush up on your zombie culling and flower farming with the original Plants vs. Zombies?