Skip to content
Posted on May 31, 2013 by Gamer Horizon Classic Import

“4A Games are honored by the reception our latest project has received,” said Andrew Prokhorov, the studio’s creative director, in a press release announcing the sales success. “We are a small but dedicated team who are lucky to have been given the creative freedom and support to make the kind of experience we dream, as gamers, of playing.” 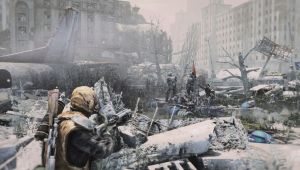 Deep Silver didn’t give any sales numbers but checking on unofficial channels, it appears that Metro: Last Light sold roughly 120,000 units world wide since its May 2013 launch. The breakdown goes as follows, 80,000 units sold in the US, 30,000 units sold in Europe and 10,000 units sold in the rest of the world. Metro: 2033 launched back in March of 2010 under the now defunct publisher THQ and to date has sold roughly 600,000 units worldwide. These sales figures may not seem like much but hitting 100k units in the first week of sales is great for a small Ukraine studio. If sales continue down this path, then it shouldn’t take very long for Metro: Last Light to reach and surpass the total sales mark of Metro: 2033.

A4 Games is continuing to work on Metro: Last Light and plans on releasing 4 DLC packs starting in June 2013. Anyone wishing to get the DLC can purchase the season pass for $15 on PSN and Steam or 1200 MSP on XBLA. All four DLC packs will be released during the summer beginning with the Faction Pack and the Chronicles Pack which will include new and original single player experiences that expand the gameplay in the Metro: Last Light universe. The Tower Pack presents a uniquely different solo challenge for veterans of the Metro franchise and the Developer Pack will give creative players new and interesting tools to explore the world of Metro: Last Light with.