In an attempt to prove that I’m the coolest member of the crew, I’ll be attempting the impossible: live blog the Xbox E3 Media Briefing, happening at 9:30am to 11:30am (?) this morning. I’ll be summarizing all the announcements in this article as the event goes on. The page is set to refresh every 30 seconds, so you don’t have to worry about any of that, and all of the newest updates will show on top… if I can keep up with the pace.

But for the time being, grab a popcorn, follow our coverage, and enjoy the show!

11:04AM – Ok, that last part was pretty cool. Everyone is ecstatic and applauding like crazy.

11:02AM – Oh, so THAT’S why it’s called TitanFall! Falling Titans, like big things, like robots! Get it?

11:01AM – It’s odd.. it’s definitely a multiplayer game. There’s scores up top and a “X person joined” that showed up on the lower right corner of the screen.

10:49AM – Below, by the guys who brought you Swords and Sworcery

10:48AM – I’m engrossed. There hasn’t been a break in the first person “action” since the beginning. First BF4 map pack on Xbox One before anywhere else

10:46AM – The waves look really impressive as it splashes across the ship’s surface.

10:42AM – People applaud. They gave them such a tough time, but they were happy when the bass came rumbling in.

10:39AM – “The Last Part of the Legend.” I guess this is Geralt’s last game. Environments look fantastic!

10:38AM – Optional voice commands with Kinect. Exclusive to Xbox One. Also, UI and inventory will be on SmartGlass.

10:36AM – SmartGlass interactivity. Calling artillery support via the phone.

10:35AM – Hundreds of weapons with improvised combinations.

10:34AM – That’s definitely a lot of zombies. Ok, I can see how cloud computing can provide “non-essential AI.” I guess to set up background animations and whatnot, it can work.

10:33AM – There were some zombies in the distance that weren’t moving. Power of the cloud?

10:31AM – Dead Rising 3 will be open world, set in the city of Los Perdidos, California. Yes folks, this is a live demo.

10:30AM – People are providing the soundtrack and sound effects of the game. This is hilarious.

10:28AM – Hey Ted, your Microsoft Points are useless now.

10:27AM – Upload Studio is where you’ll edit and publish your videos that have been recorded. Also, the video that came after was pre-recorded… he missed that uppercut.

10:24AM – Sorry if I’m not taking photos. I’m only one person and the internet is TERRIBLE

10:23AM – SmartGlass and broadcasting capabilities

10:18AM – Project Spark. “Turn making a game into a game itself. Share it to everyone, everywhere, on any screen.”

10:13AM – There’s Sam Lake himself. “The choices you make in the game create your personalized version of the TV show.”

10:11AM – Solidifying their commitment with independent gaming

10:10AM – I’ve always liked the Forza series, so this was a no brainer for me if I was picking up the console.

10:09AM – “Your drivatar learns to recreate your speed and style.” Justifying why they need cloud computing on consoles. “This is about delivering real reactions, real mistakes.”

10:07AM – “True innovation is unlocked through its connection to Xbox Live.” Live demo right now.

10:04AM – The explosions look like jello explosions. But it looks interesting.

10:02AM – Insomniac and Microsoft is working on something together. Hmm.

10:01AM – KILLER INSTINCT! Exclusive to Xbox One. Co-developed by Double Helix and Rare.

10:00AM – It’s definitely a next-gen game. A lot of the post-processing and shaders are sharper than if it was on the Xbox 360. Will be interesting to try out.

9:59AM – Still no Kinect functionality… I guess they ripped it apart and remade it to use the controller?

9:58AM – Frame rate is relatively smooth, until now. The background artwork is making it a little bit choppy.

9:55AM – Lots of chaos, very God of War-like in its presentation, but of course, no Blades of Chaos. By the way… not using the Kinect (there’s a controller in the demo person’s hand)

9:51AM – From Software. These aren’t mentioned that they’re exclusive, mind you… just that they’re coming to Xbox 360. Gotta be Dark Souls 2.

9:47AM – CEO of Wargaming pops out, “At Wargaming, we create blockbuster games. we have delivered a global hit on the PC and are now bringing it to Xbox 360.”

9:45AM – World of Tanks will be exclusive to Xbox 360. Some people thought it was going to be League of Legends. Nope.

9:44AM – Two free games per month for Xbox Live Gold members from July onward, for both new and existing members. Assassin’s Creed 2 and Halo 3 to start.

9:43AM – “We’re gonna update the Xbox 360 console with a modern feel with the Xbox One design.” Starting today. That means the new design is out today.

9:42AM – Don Matrick and Hideo Kojima shows up. Confirms it was running on Xbox One 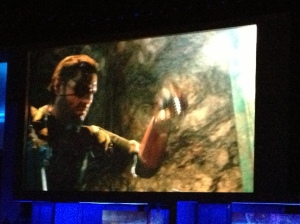 9:38AM – This is open world. Shows Snake hiding behind a horse, changing weather in real time. Trailer is fast forwarding through scenes showing off some of the game’s feature sets. Textures look pretty good!

9:37AM – Yep. That’s Snake alright. The question is… is that Shalashaska?

9:23AM – The WiFi is slow as molasses in here. Someone’s probably torrenting something.

9:13AM – Just as a warning, all coverage will be on this page. Instagram and Vine will not be used for the event.

9:11AM – Hello to the people on the website joining us today! It’s going to be… interesting.

8:54AM – Met some nice people here covering the event. Sitting down on a sideways position and saw the Doritos ads. Doritos-gate lives!